The mysterious journey of how I started to manufacture Wild Chaga Extract around 2011 is more than interesting. Friends I considered experts in alternative healing had told me about a polypore mushroom that grows wild on birches. Folk medicine has credited potent healing abilities to this adaptogen, which could apparently help the body to heal by restoring balance, boosting the immune system, and cleansing the blood. This is exactly what I was looking for, to treat a viral condition that had bothered me and for which conventional medicine had no cure. 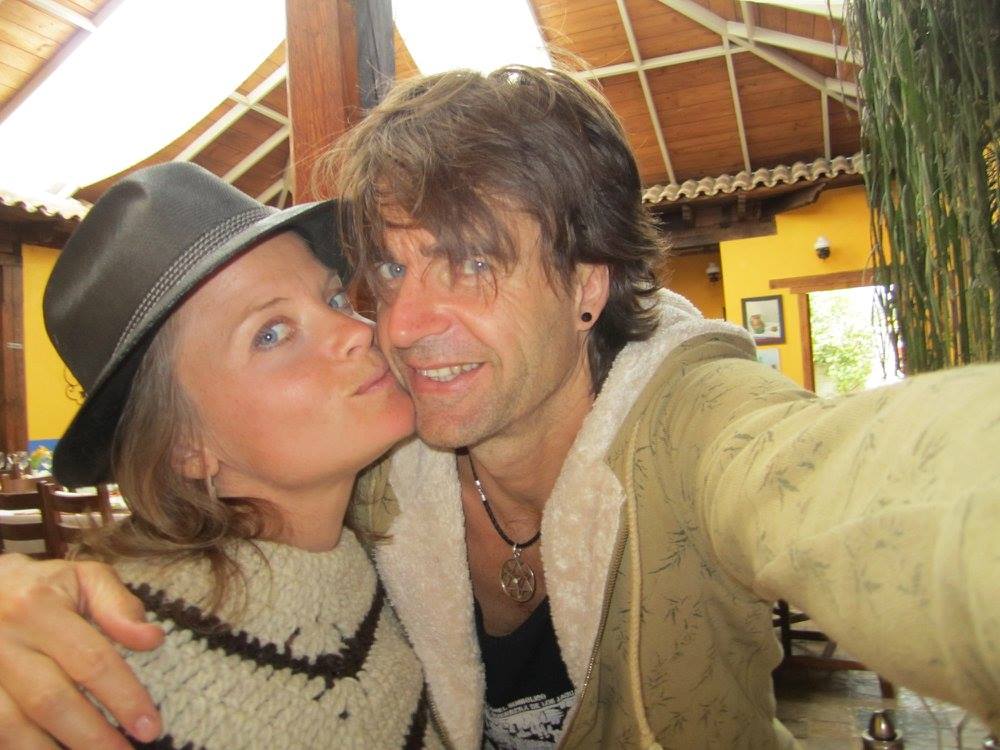 I set out on a mission to find this rare mushroom and after looking for several months, luck stroke. I found my first Chaga mushroom after I made a heartfelt prayer. What I harvested was enough to last me two years and I began making Chaga tea every day on the old wood burning stove in the kitchen of the clay building where I began to live for the next several years together with a beautiful and wise woman. 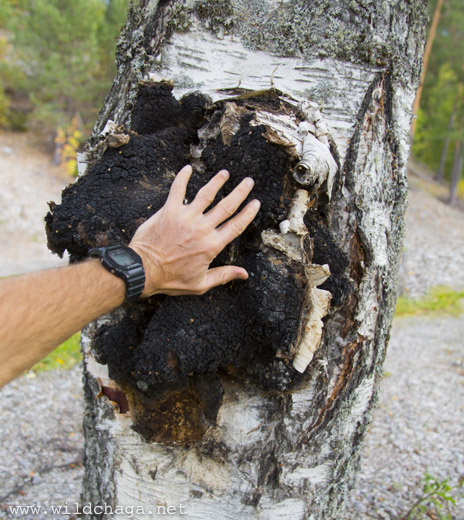 From that moment onwards, all I had to do was pray, and the mushroom would reveal itself, almost always. I also dreamt of a very special recipe after working many years with Wild Chaga and I began to create a most potent extract from it that is an amazing natural remedy for a variety of health conditions. I used that on myself successfully for nearly a decade and when other’s found out about it, they also wanted to try the extract, so I started to share, trade and eventually sell it.

“Inonotus obliquus” is the adaptogen mushroom commonly known as CHAGA, a fungus parasitic on birch and other trees. This incredibly powerful adaptogen is one of the most potent antioxidants found on the planet. The sterile conk is irregularly formed and has the appearance of burnt charcoal. CHAGA originates from Russia and Northern Europe, where it was used in folk medicine, even in Norway, with records dating back to the early 15th century! 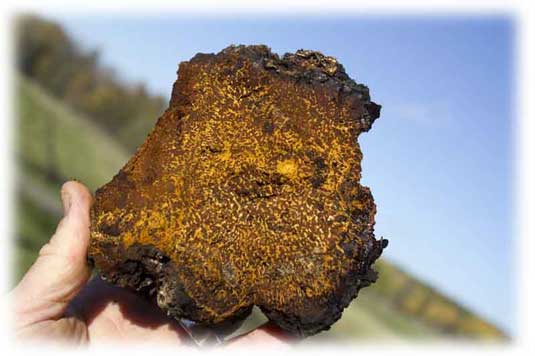 Chaga grows in the Northern far regions of our planet, in an average on 1 out of 1000 birch trees. The mushroom produces a wide range of active compounds that show potent anti tumor and antiviral activities. Chaga-Mushroom from very cold places (such as Norway) have strong anti-inflammatory, antioxidant, and immune balancing properties that can help the immune system to build natural T-cel

Taking Wild-Chaga-Extract helps to battle infections, viruses, and (possibly) even prevent or reverse tumor growth. Chaga also lowers blood sugar levels, making it an interesting alternative for borderline diabetics. It’s also a blood thinner, so caution is advised with people who take aspirin or are on pharmaceutical medications. Most older people receive blood thinners to prevent embolism. Chaga does that naturally! The main bio-active components in Chaga are the nonlinear, complex (1>3) and (1>6) Beta-D-glycan’s, a type of polysaccharide. These molecules exhibit the ability to prevent a range of diseases. They trigger and support immune function, rather than aiming to attack a certain virus or symptom, as it is commonly done in Western medicine. Chaga works systemic as a preventative immune system boosting agent, thus having healing effects on a variety of chronic diseases. The Wild Chaga Mushroom Extract we manufacture supports the body’s ability to heal itself. Scientific research has been focused much on the anticancer potential and showed the effects of the polysaccharides to be comparable to chemotherapy and radiation, without known side effects. I do, however, notice a coarseness on the throat when drinking a lot of the tea regularly that I do not get with the extract. 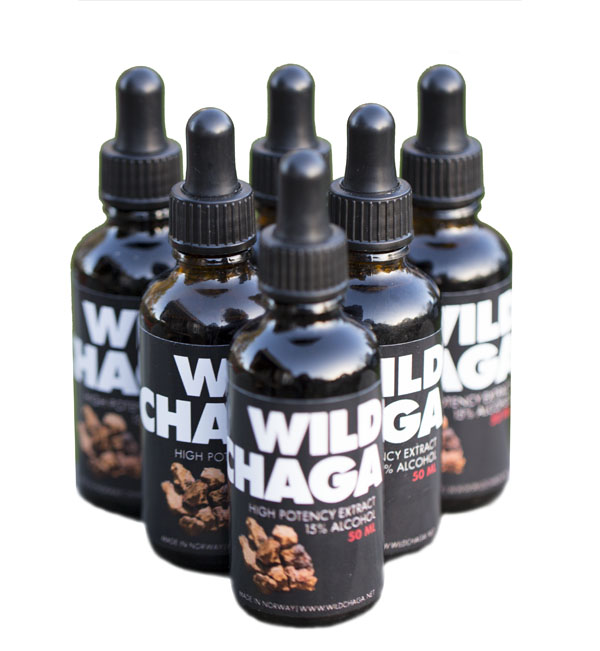 For therapeutic purposes, an extraction process is necessary to make some of the bioactive components bioavailable, because they do not break down using only hot water extraction (making tea). Water-insoluble components, such as phytosterols, betulinic acid and botulin are extracted with our unique extraction method that results in very high levels of polysaccharides (sugars present within the Chaga-mushroom). Our extract even tastes sweet and similar to liquorish, because we manage to get lots of the good stuff out! The results are impressive. We tried our extract on many people who started feeling symptoms of the flu. 75-85 % report improved results when using high amounts of our extract within the very first symptoms (4-8 full droppers, 3-4 times/day during 24-36hrs). This means that the flu never broke out! The same it is with other viral diseases, such as Herpes, which completely goes away when taking the extract. Of course, trigger factors for viral outbreaks also have to be removed. Taking oral pharmaceutical antiviral medication has heavy side effects that can destroy vital organs over time and they have a tolerance! Wild Chaga Extract does not seem to harm the body or it builds a tolerance. Surely, more human studies are needed to verify this. However, in our experience, Chaga definitely suppresses viruses really well, and in some cases, eradicates them. 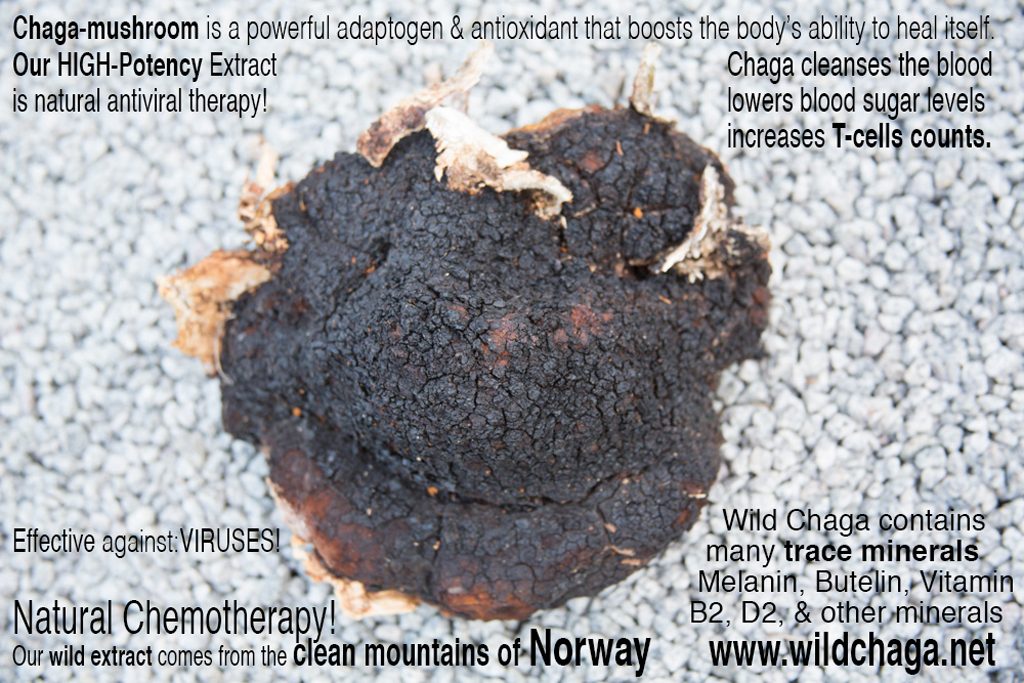 Wild Chaga Extract2018-12-292018-12-29https://www.transcendentaljourneys.com/wp-content/uploads/2020/05/transcendental-journeys-visionary-writing.pngTranscendental Journeyshttps://www.transcendentaljourneys.com/wp-content/uploads/2018/12/wild-chaga-extract-best-in-the-world.jpg200px200px
Recommended Posts
Claim your FREE eBook
Subscribe to the FREE Newsletter to receive Omananda writings only shared with Newsletter subscribers. You will get special discounts over time and freebies.
Subscribe to the Podcast
Google PodcastsAndroidby EmailRSSMore Subscribe Options
Copyright: www.omananda.com - all rights reserved © 2020
Contact Us 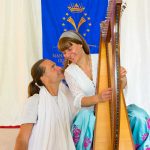 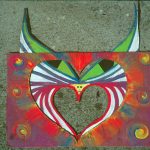