The Art of Banksy – Exhibition curated by Steve Lazarides; Review

I recently went to the Art Exhibition “The Art of Banksy,” in Berlin that was located on the upper floor of a shopping center called Bikini, which refers to the clothing covering breasts of women. 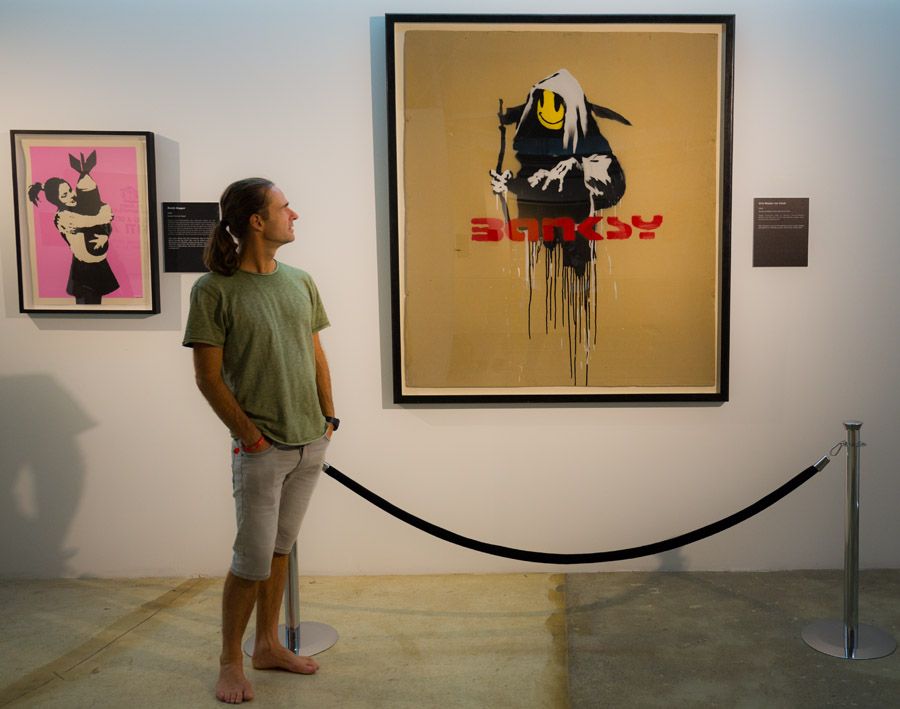 Nonetheless, I paid the money and liked the explanations about most of Banksy’s art pieces, although the exhibition was microscopic in size. It was fine to see different art that was not only street art made by Banksy, since street art generally is free to look at, and Berlin has plenty of it!

Banksy used to purchase old oil paintings such as the one above. He would add his weird stuff to it and one could purchase some of these prints, or originals, on request. Tt was possible to take pictures of the exhibition too. This was included in the price. 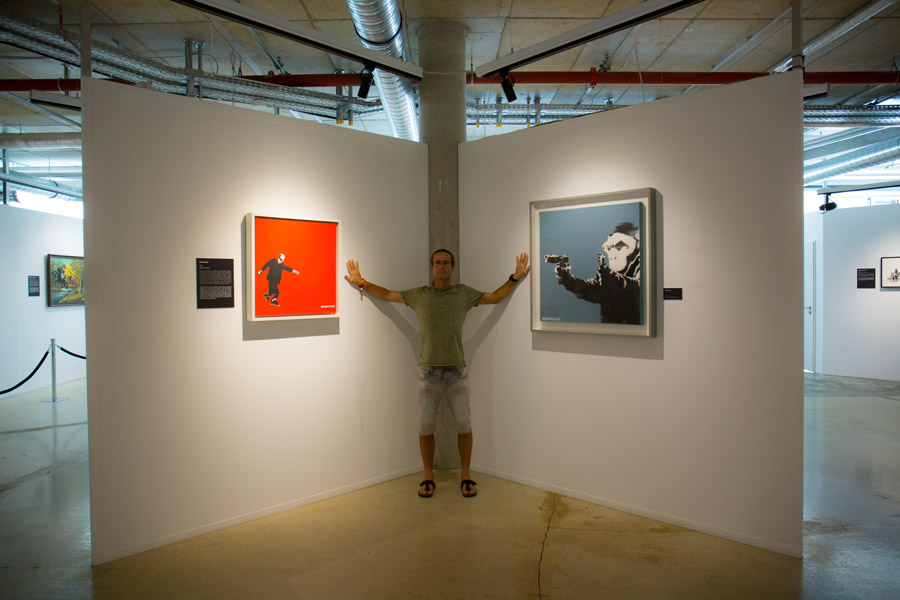 A five-minute (badly edited) movie rotating in one of the three show rooms had parts of the award-winning documentary Exit through the gift shop in it. I had already seen that Oscar winning movie years ago, but the  gallery video also portrait how people fought in frenzy for newly appearing Banksy street art, even taking walls of entire buildings down to save Banksy’s art that was worth more than the building itself, or perhaps the building was torn down anyway? You could not really tell from the movie, but it looked as if make-believe on film in regards to raising the stakes on Banksy’s art. 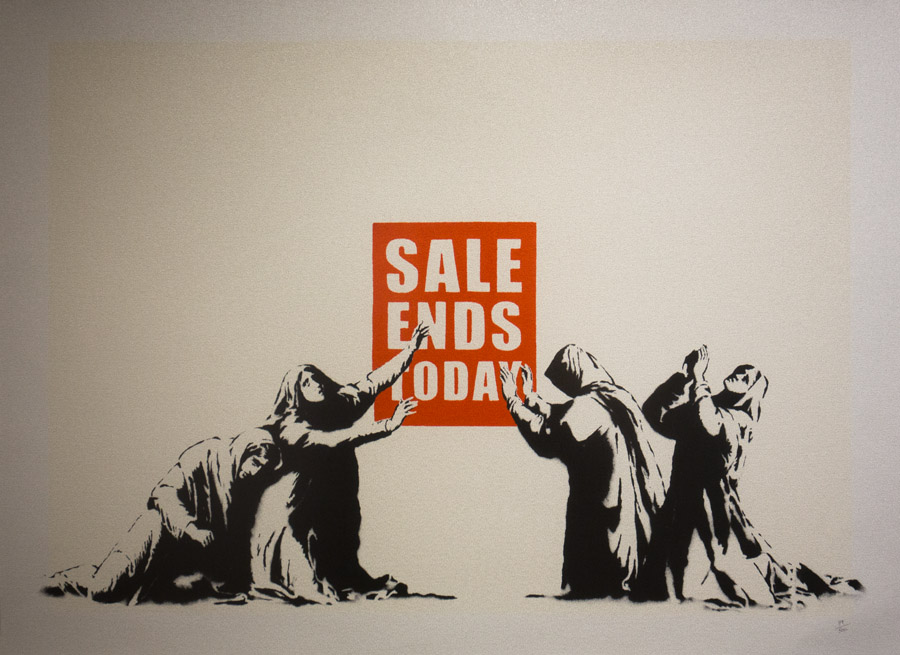 What I felt when I exited the tiny exhibition was that Banksy has seriously dark humor and a daring character that expresses system critical views about a society that has gone haywire. Banksy crossed the line more than once with his art. He made and probably continues to make profound political statements and he catches people’s attention! 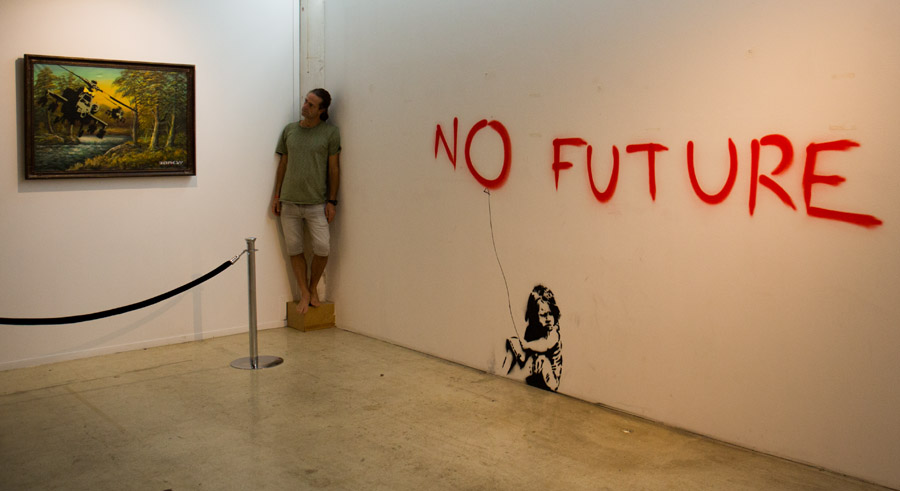 The art of the elusive graffiti artist Banksy, who’s identity has still not been revealed or discovered, can be seen in different countries around the world. You can even purchase a piece of Banksy’s art on a T-shirt for a reasonable price. Then you can serve as a living advertisement for the curator’s and Banksy’s purpose and spread the message! What was that message? Surely, each art piece has a story of its own, but much of it is controversial, such as; don’t buy this shit, but buy my shit. 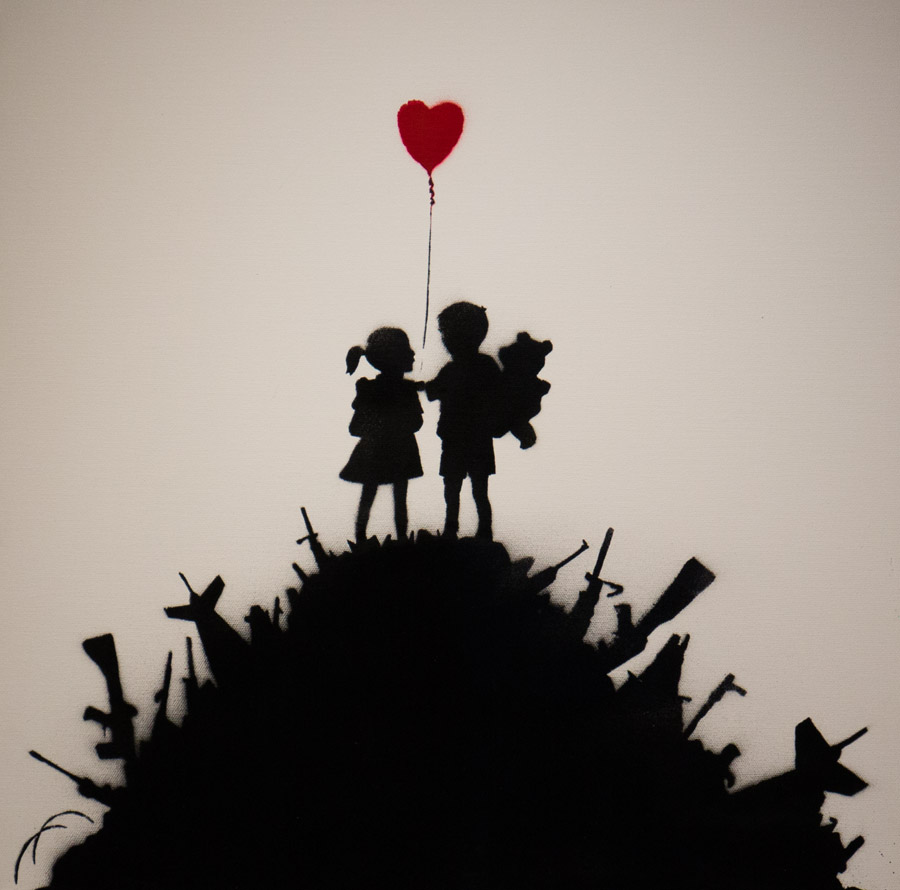 A question remained (for me), and may be Banksy inspired me to think a little in this direction, what systems of society function without the corruption of an imaginary currency that is not based on principles of love and compassion? To me, the real currency that creates reality always was been and always will be: consciousness & love. 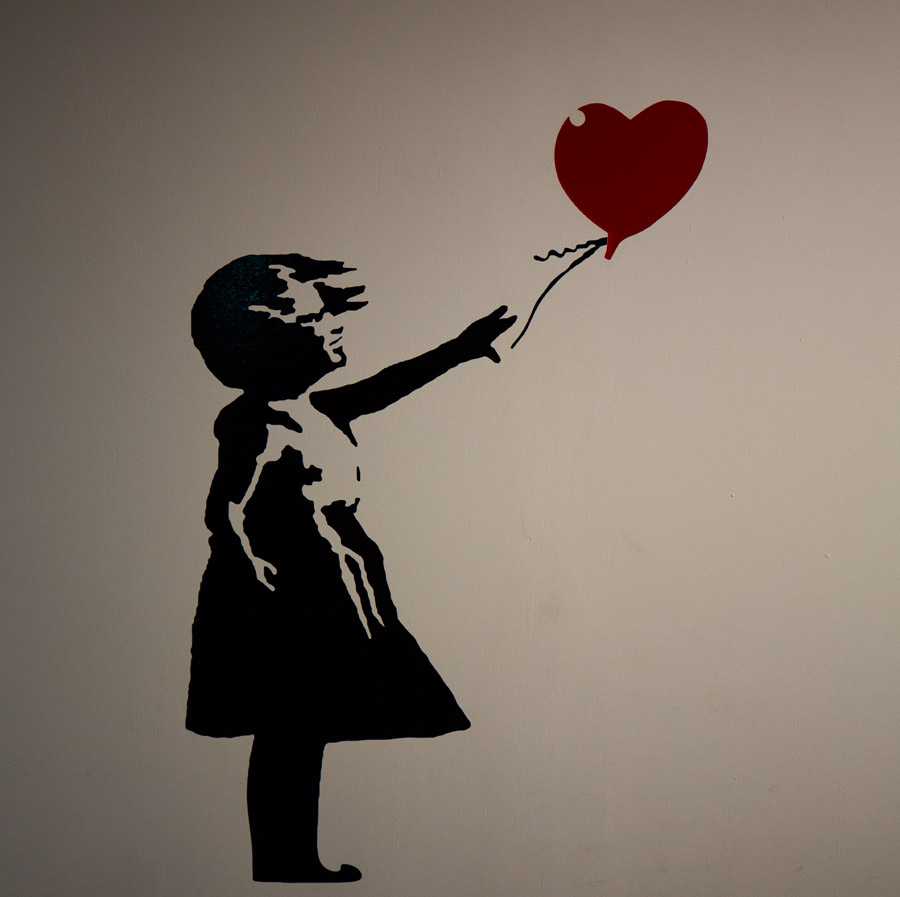 I believe when any type of cosmic being becomes conscious enough to realize the sacred relationship between the creator and its creation that money will likely not be needed any longer – to make ends meet in this spiral of life. When the qualities for life will be valued as the highest, we will have truly evolved as a species, but can we mange to protect our planet from the unsustainable contemporary civilization we have co-created as tax-payers and consumer slaves? Most organic life forms on our planet require clean water, clean air and clear skies, for the sunlight to reach the planetary surface, without obstructions. Sadly, all these basic things are under threat today. 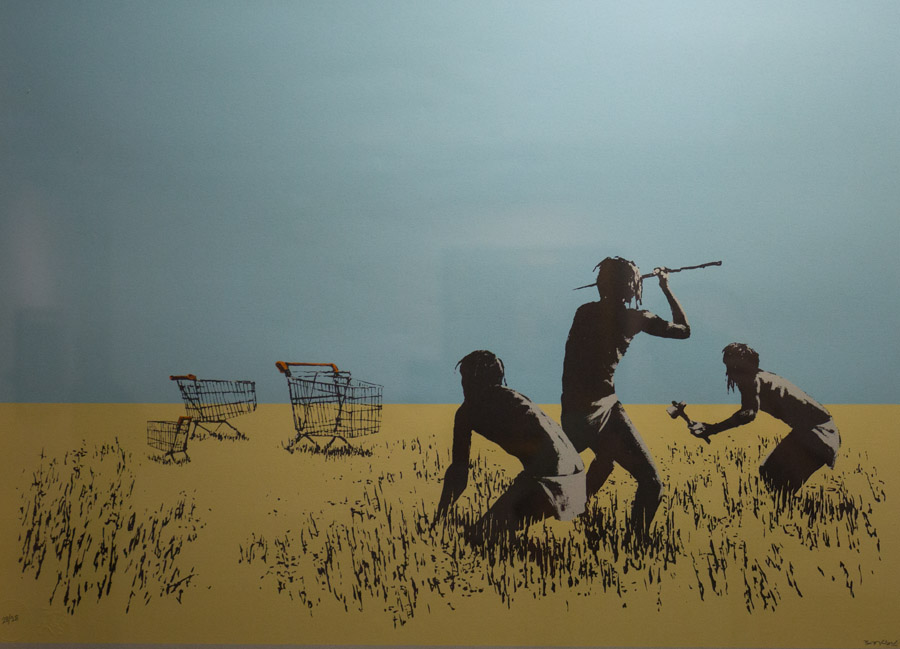 Hopefully, Banksy’s art helps the slumbering members of our species to wake up quickly and get a grip on “reality.” I like Banksy’s art. That’s why I went to see the exhibition at the first place and supported his efforts that seem both; revolutionary and highly creative! I love such creativity, as it holds the hope for our future. Creative inventions can help us all to come up with the positive and peaceful solutions so that we can face the challenges that will keep on coming our way. We need this kind of wake up call badly, especially NOW! 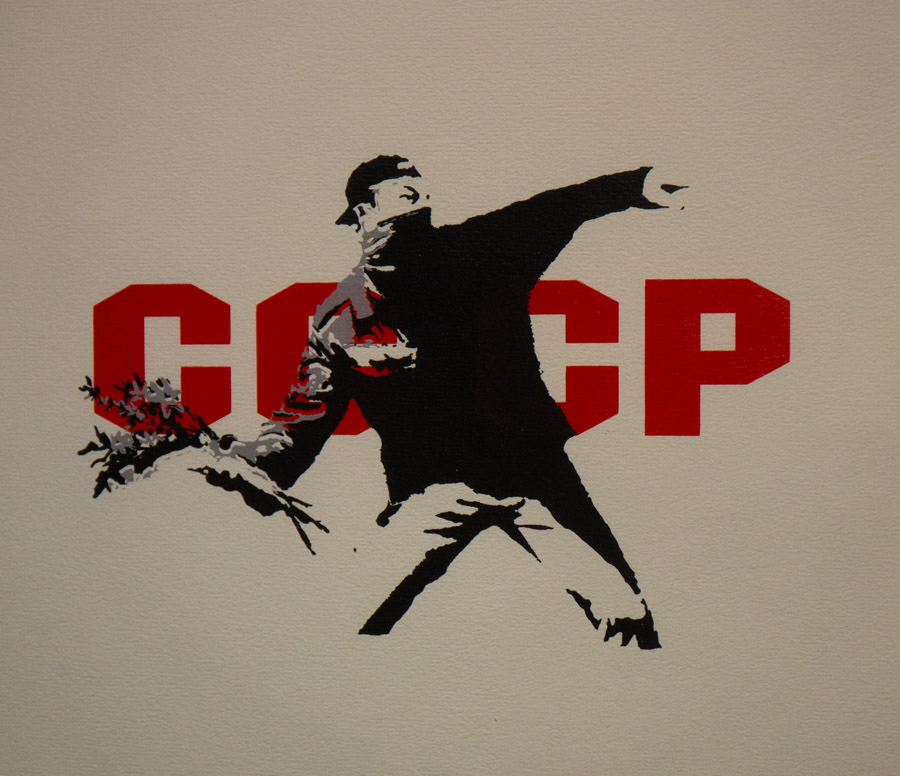 The Art of Banksy – Exhibition curated by Steve Lazarides; Review2018-09-252019-05-13https://www.transcendentaljourneys.com/wp-content/uploads/2020/05/transcendental-journeys-visionary-writing.pngTranscendental Journeyshttps://www.transcendentaljourneys.com/wp-content/uploads/2018/10/the-art-of-banksy-exhibition-in-berlin-10.jpg200px200px
Recent Posts
Claim your FREE eBook
Subscribe to the FREE Newsletter to receive Omananda writings only shared with Newsletter subscribers. You will get special discounts over time and freebies.
Subscribe to the Podcast
Google PodcastsAndroidby EmailRSSMore Subscribe Options
Copyright: www.omananda.com - all rights reserved © 2020
Contact Us 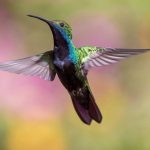 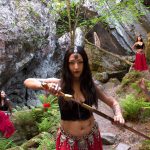