My Time in Madeira

I wanted to share a little about my recent time in Madeira where I was living, in Prazeres in the vicinity of Calheta, during the winter of 2017/18. 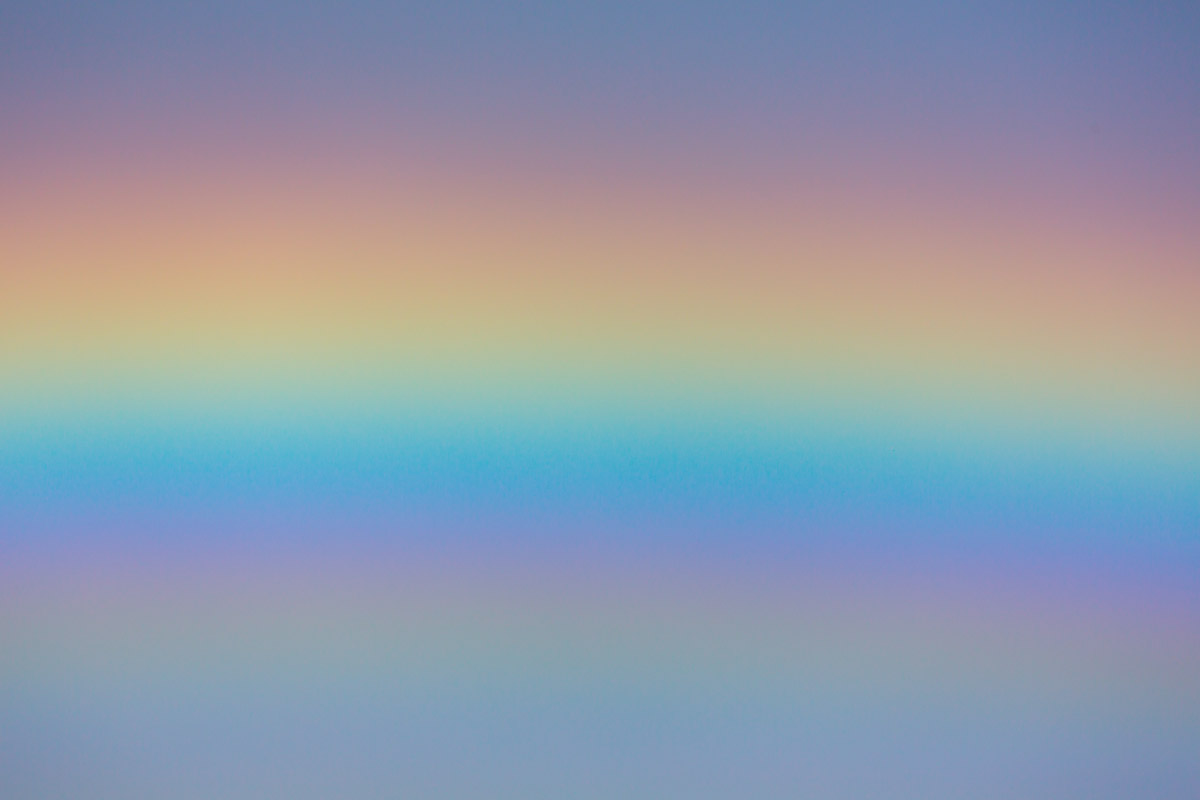 * Photograph of a Rainbow from the house where I stayed.

Yes, it was rainbow season and during some days a rainbow would be behind the house all day long. I had only seen this many rainbows at once in Kauai. Hawaii is somewhat related to Madeira. Apparently when foreign settlers moved to Hawaii a group of Portuguese people from Madeira was asked to help them with farming techniques, so today a Portuguese community exists in Hawaii. Indeed, Madeira has some similarities to Hawaii, partially due to climate and geology. Both island groups are volcanic, but no major storms such as hurricanes have destroyed the flora in Madeira. Kawaii is overgrown with monocultures of invasive species and not so interesting in terms of biodiversity. On the contrary, the biodiversity of Madeira is astounding! It is one of the only places in the world where endemic forests are still preserved! 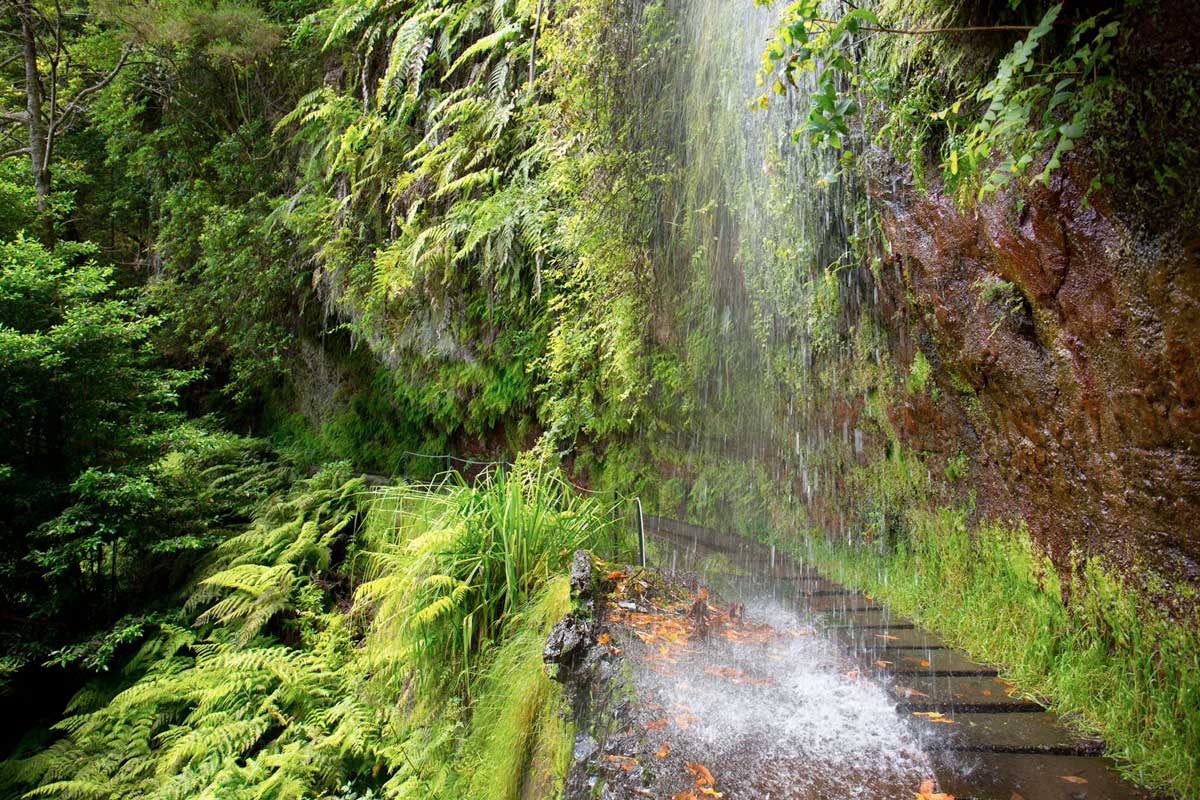 Also, what really impressed me in Madeira are the water channels called levadas that transport water from the rainforest-like wet side of the island to the California-looking side of the dry parts. These waterways that need to be maintained through walkways are the ideal tourist attraction since hiking goes side by side with the leveled liquid. Views are astounding! 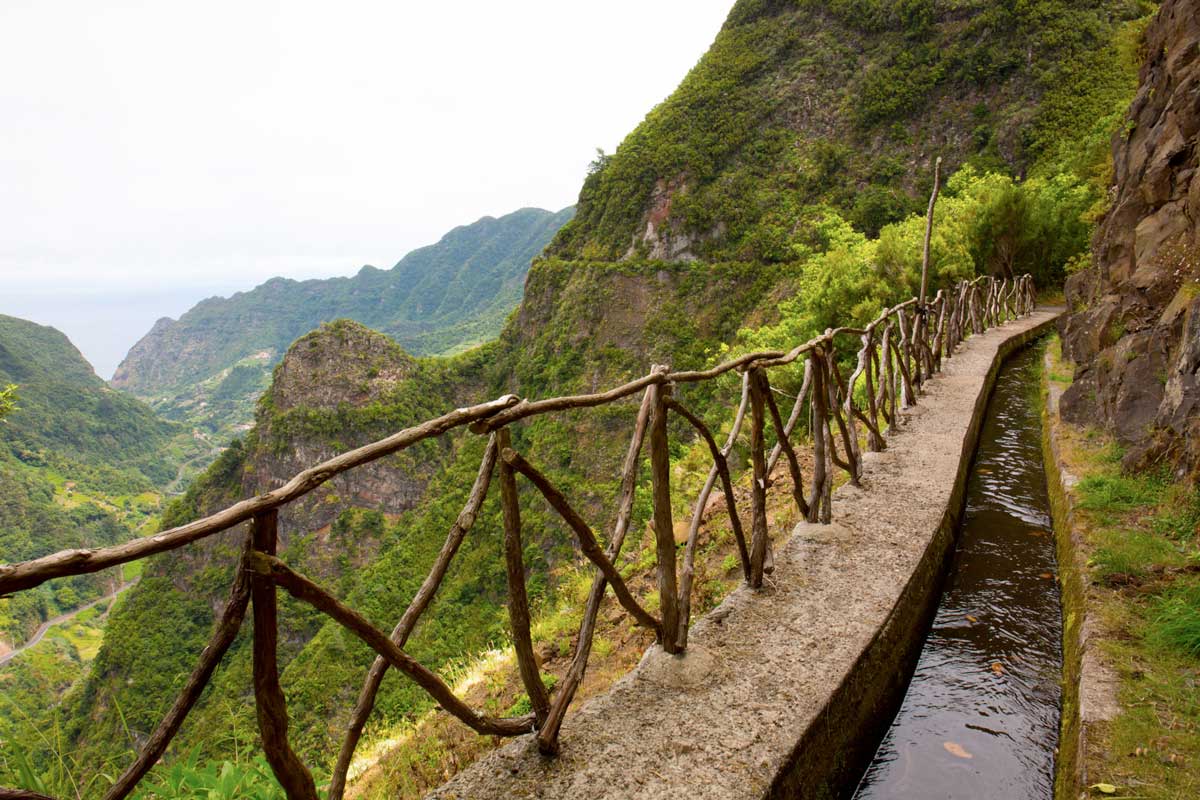 Many micro-climate zones exist in Madeira – nine to be specific. The one I enjoyed most is the jungle that reminded me a lot of Jurassic Park. Evergreen and ancient Laurel hardwood trees are the basis of this impressive forest through which trails are carved that give any type of hiker the challenge they can handle. 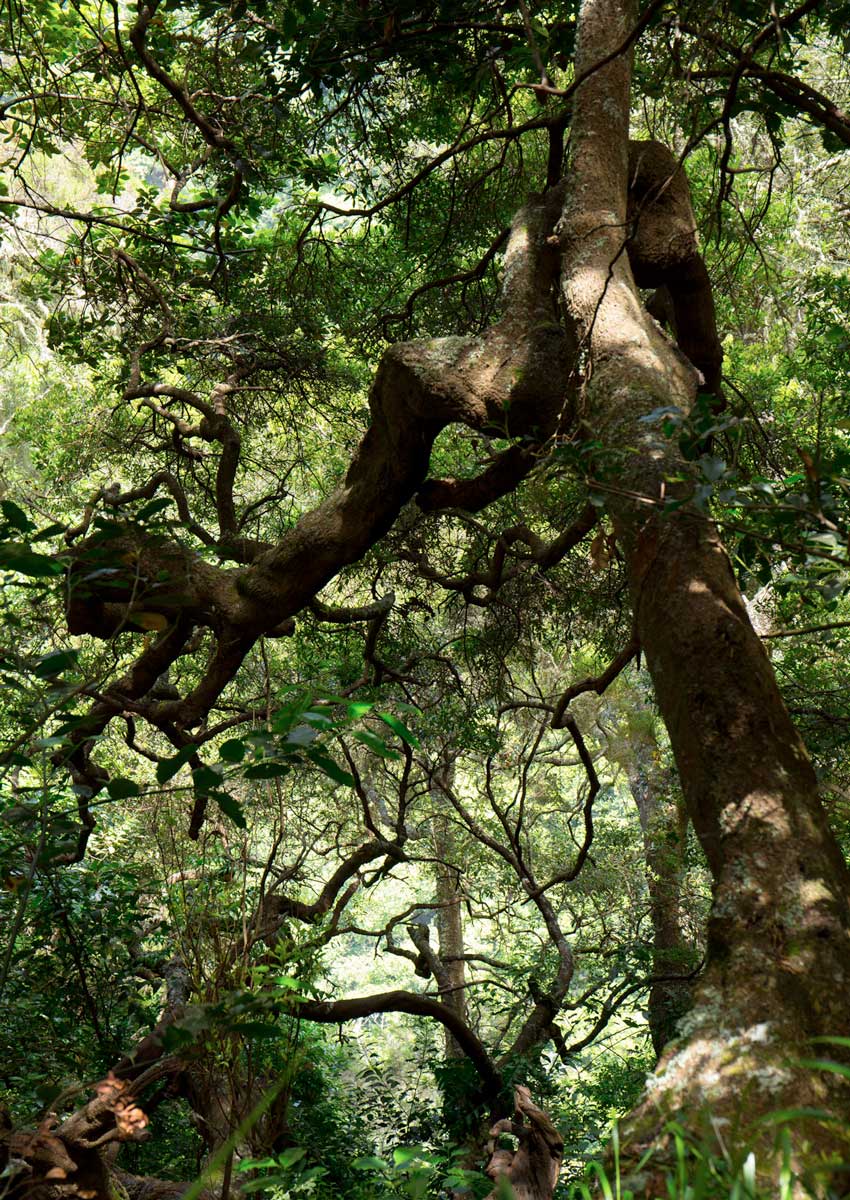 Some parts of Madeira look like Peru. When I look at photographs of Matchu Pichu it looks strikingly similar, apart from the ancient ruins of the Inca settlements.

Madeira is know as the perl of the Atlantic and the flower island and it felt like a place outside this world many times! For those who like flower-power, Madeira is just the place. Every road has flowers (and water channels) next to it. 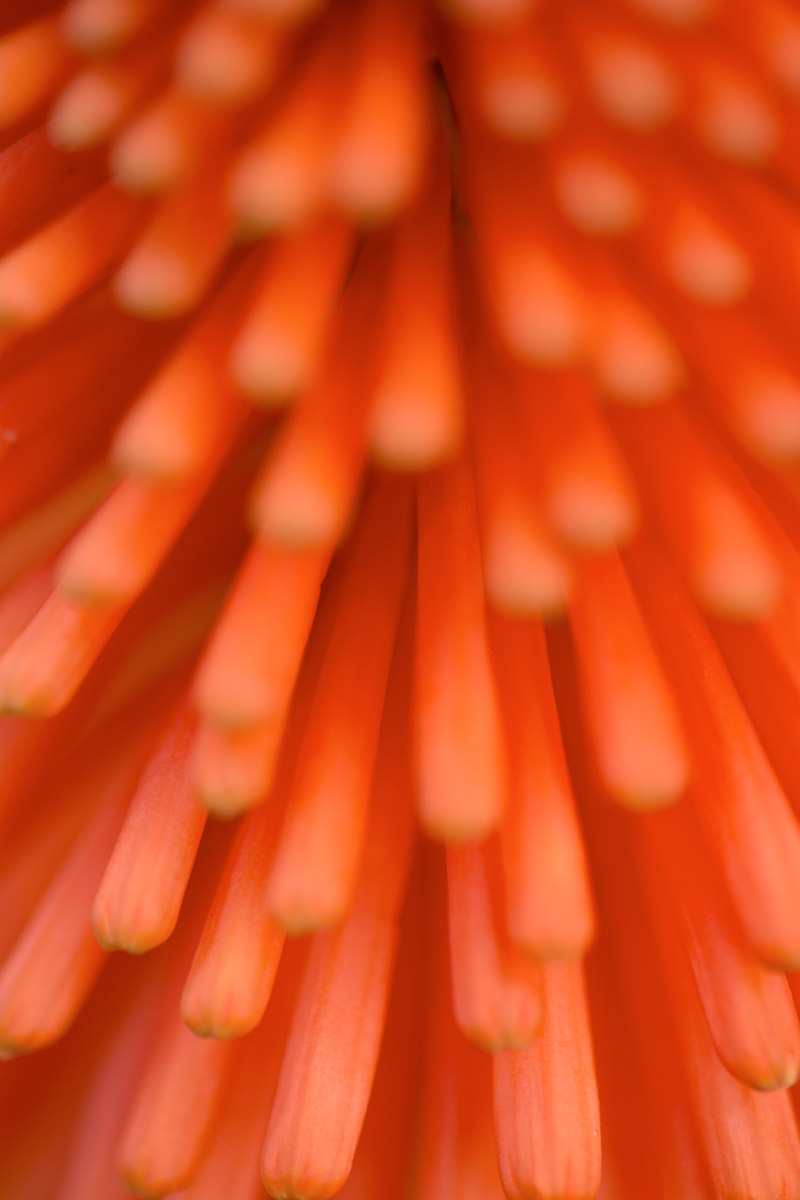 There are no big animals on Madeira that eat the plants, apart from rabbits that are hunted ferociously by predatory birds. The flower festival in spring is the culmination of the exhilarating week long flower-celebration. 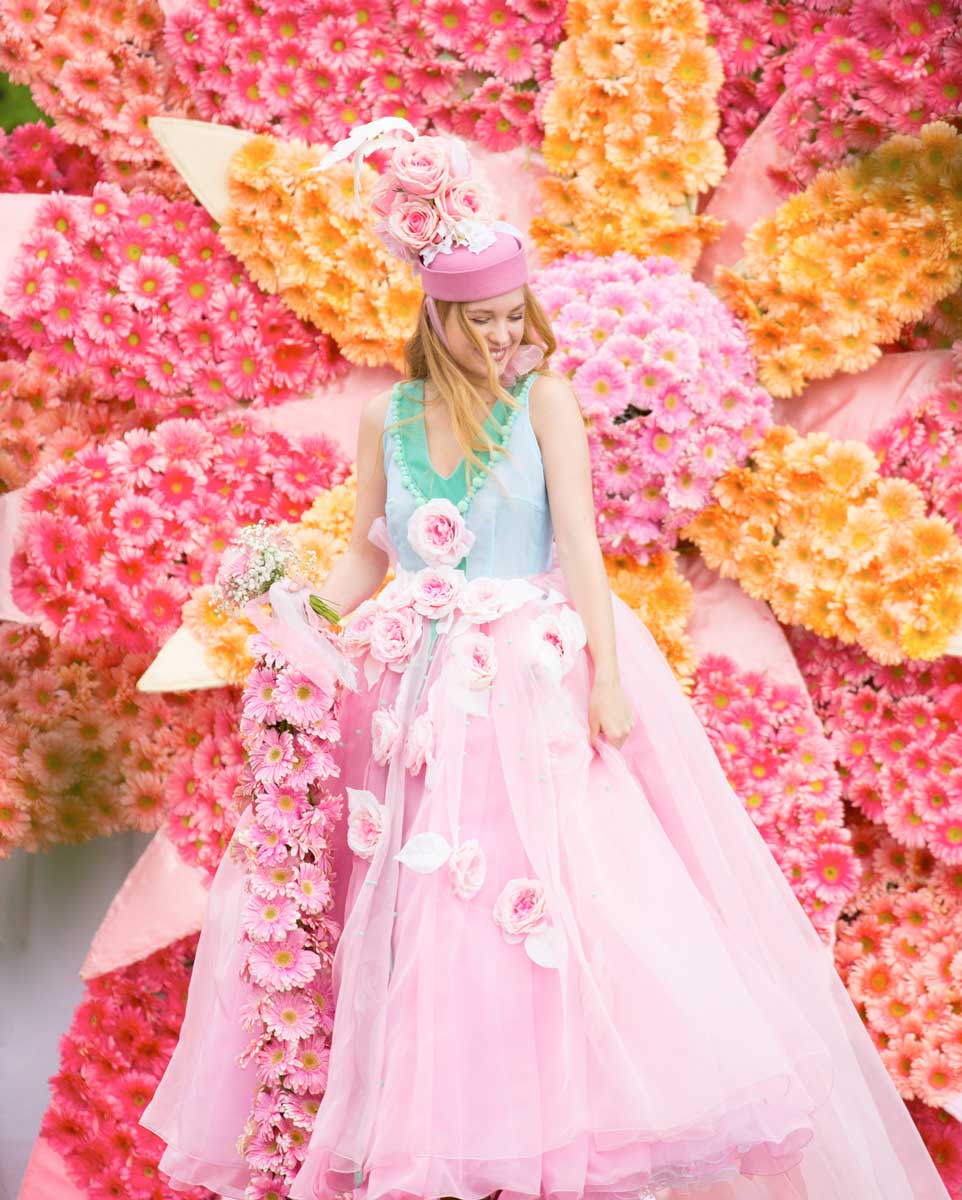 What else … I got inspired to make didgeridoos out of Agave! It was a long dream of mine to do that, but I had never found wild agave yet, until I visited Madeira. 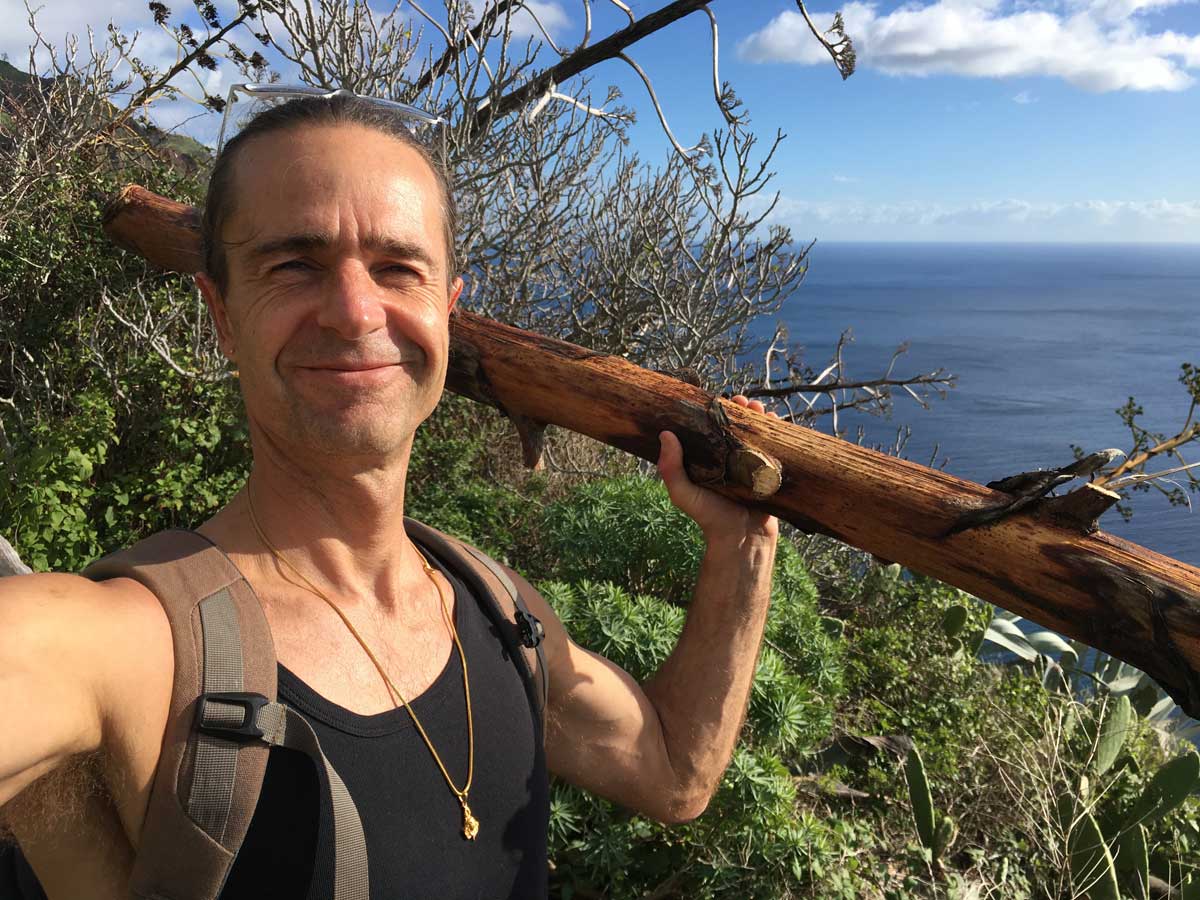 I was intently looking for the flower stalks until I found them when I was traveling with a witchy and loving friend of mine. She’s beautiful … Ayni! 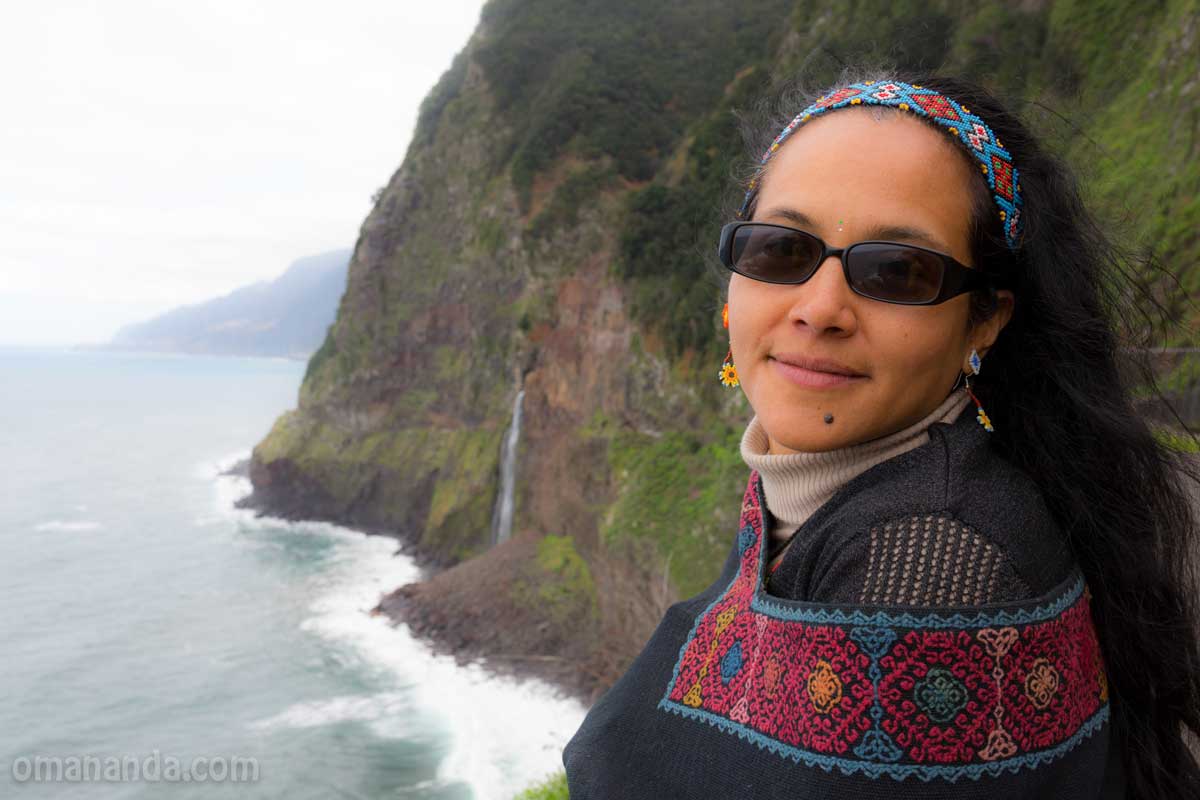 PS: A few agave didgeridoos are available on this website. Check out the shop.

My relatives came and visited me and they were amazed what is possible on Madeira. You can be in the ocean swimming in subtropical temperatures or drive up to the mountains and be surrounded by stormy, foggy and freezing weather. Even Bali-style parks exist in Funchal, with Buddhist statues, but no real temples of that sort.

Churches are plentiful instead and abundant. They are not so scary since they don’t depict the Christ on the cross that much, but mother Mary with baby Jesus instead. 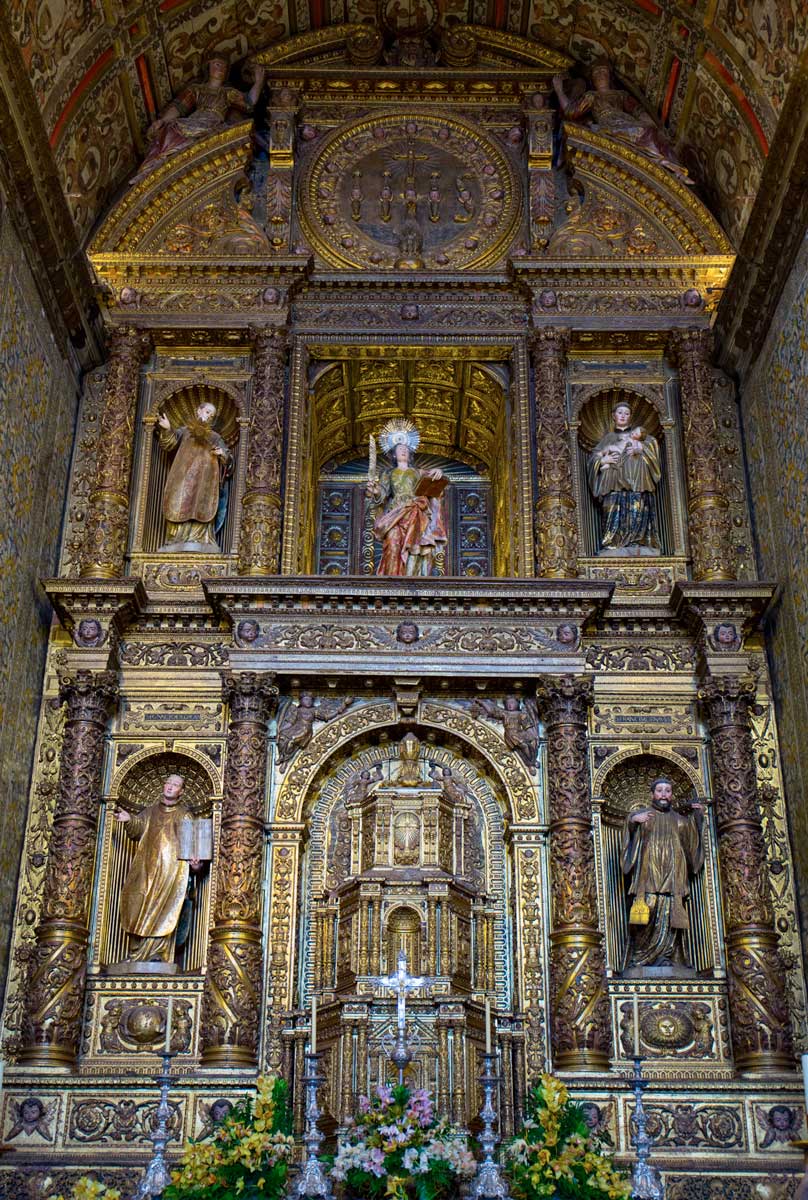 When storms approached, the island transformed and woke up from a lovely flower place to a dragon-like ferocious thing. 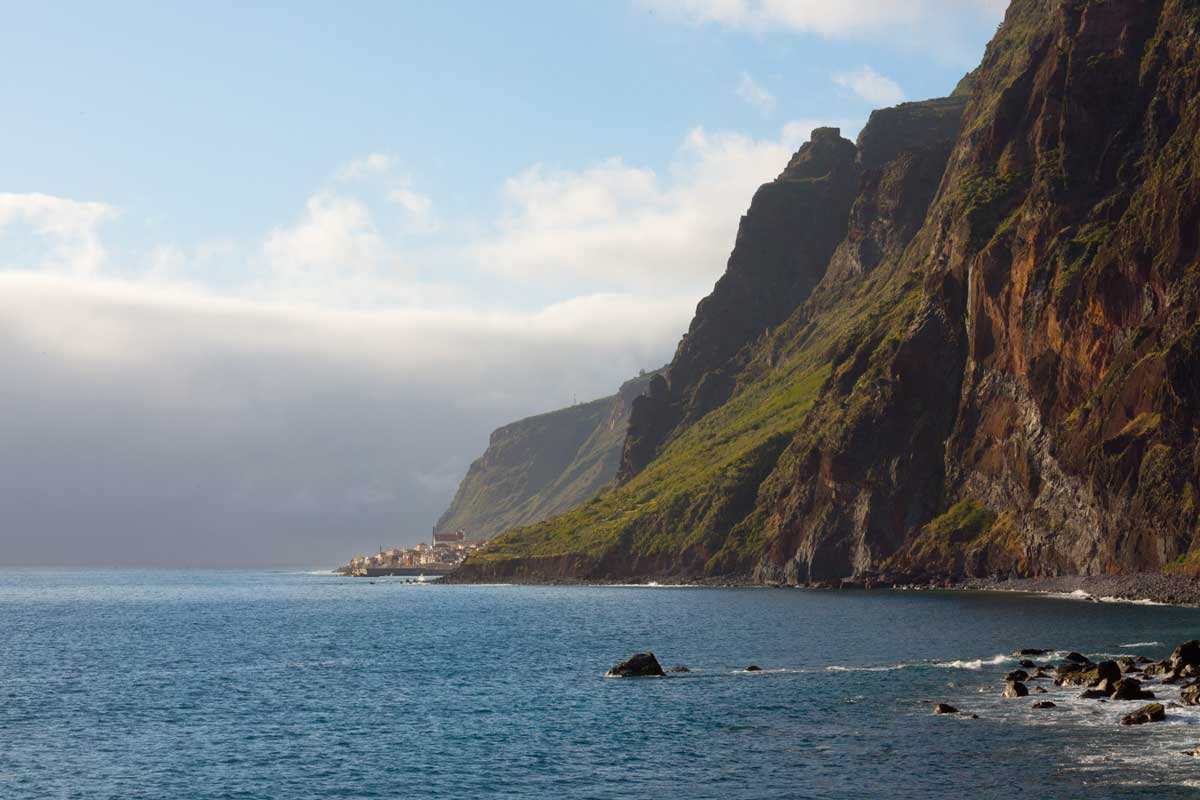 Also that was beautiful to witness! 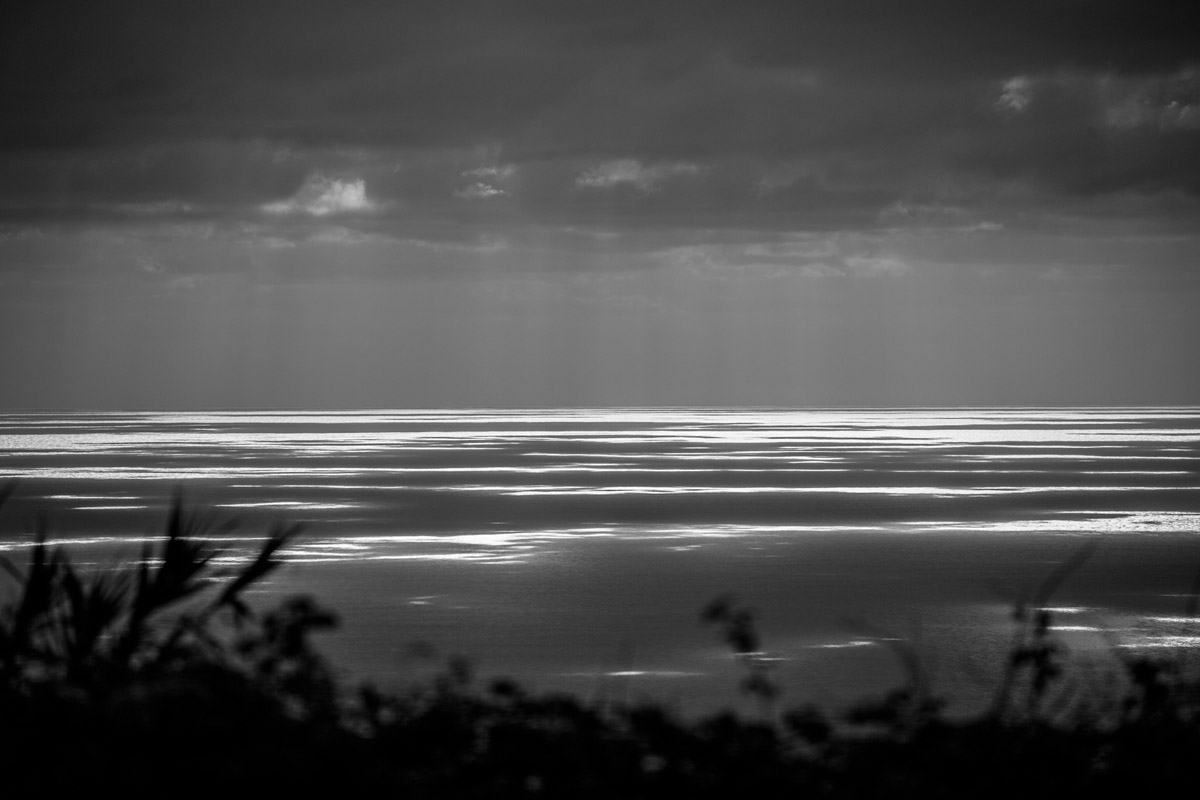 But what I loved most in Madeira was the deep peace and healing energy I felt. 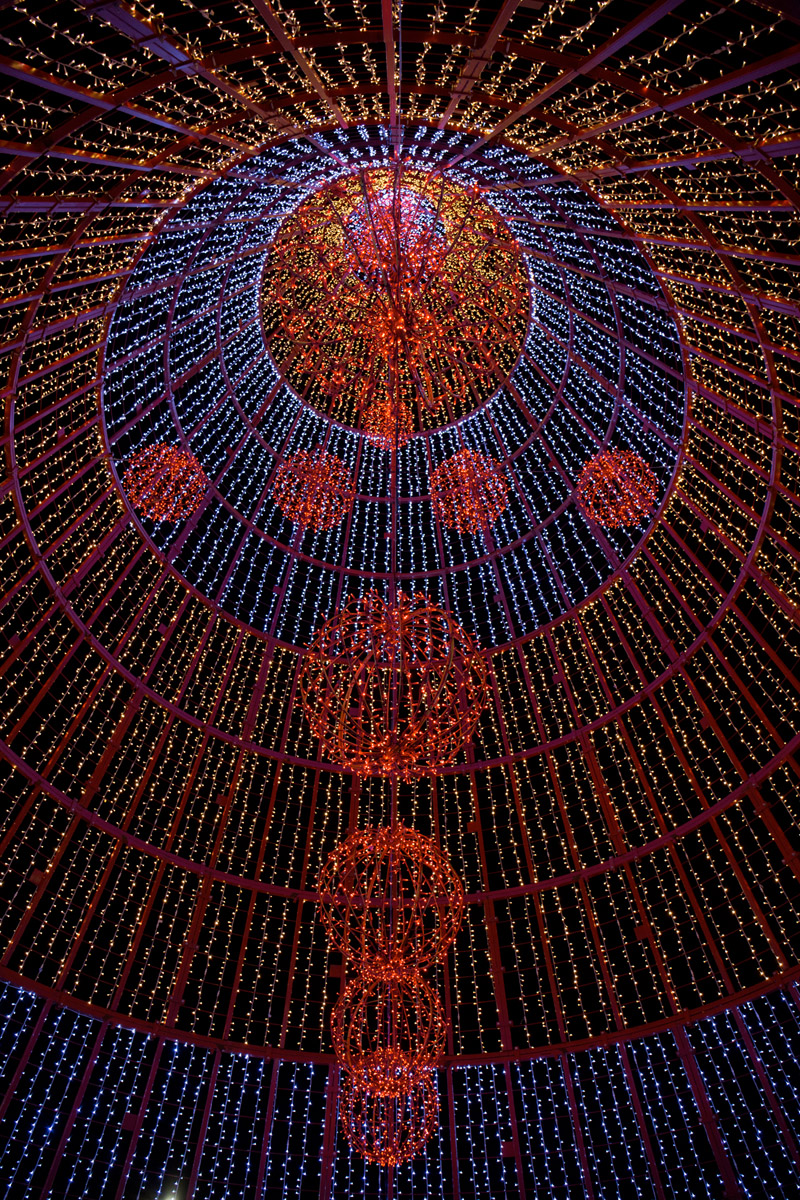 * Light Sculpture in Funchal during Xmas and New Years Celebration.

I run into a Yogini who was teaching Tantra and Sexual Healing. Her studio was right next to one of the major churches in downtown Funchal. Daring, I thought … so I had to check her out. What she did was indeed loving and probably needed. 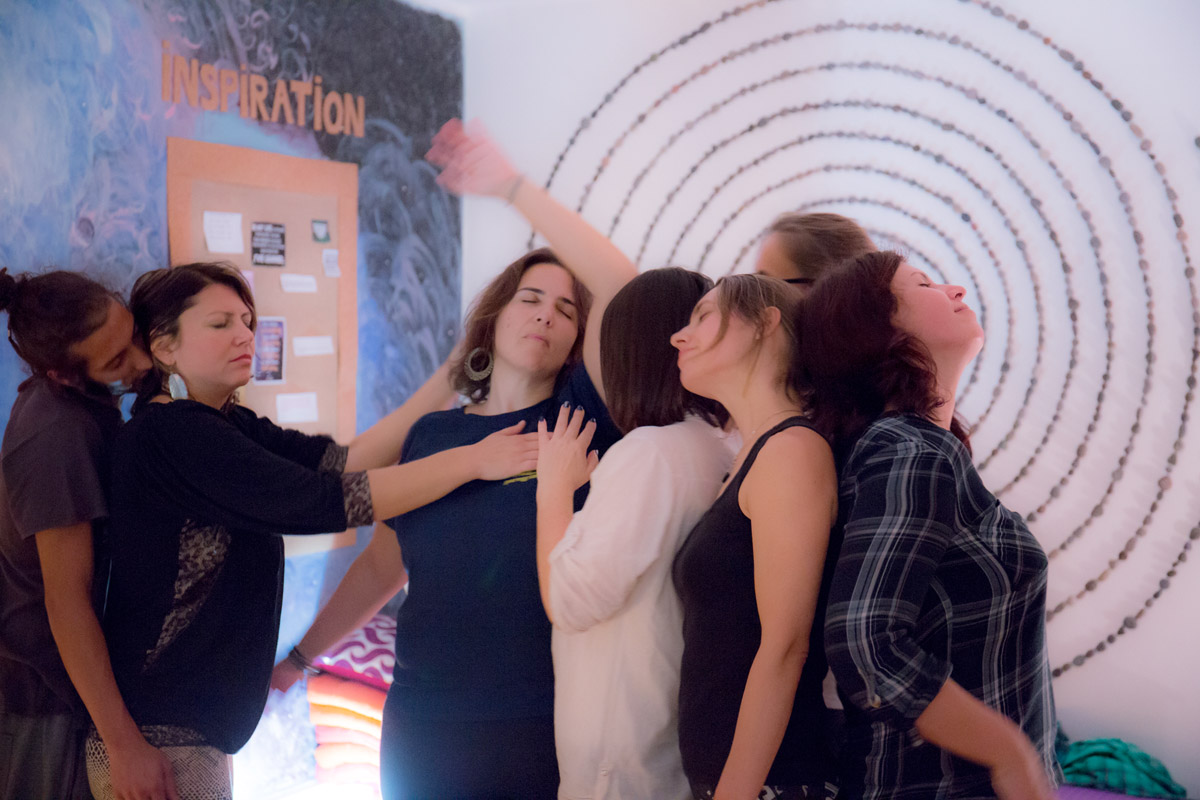 Ahhh, there is so much more to say about Madeira and my time being there. I was in a sort of isolation retreat. That always gets to me after five or six months. I was in semi-isolation for eight. It was long and peaceful. I finished and published my recent book from there and also recorded and edited my audiobook with this funny set-up!

There was one afternoon when I spontaneously went for a walk following an online app that would guide me on walking paths. This was incredible as I found one of the biggest waterfalls on the island and also saw at least twenty five smaller ones on the way – all drinking water !!! 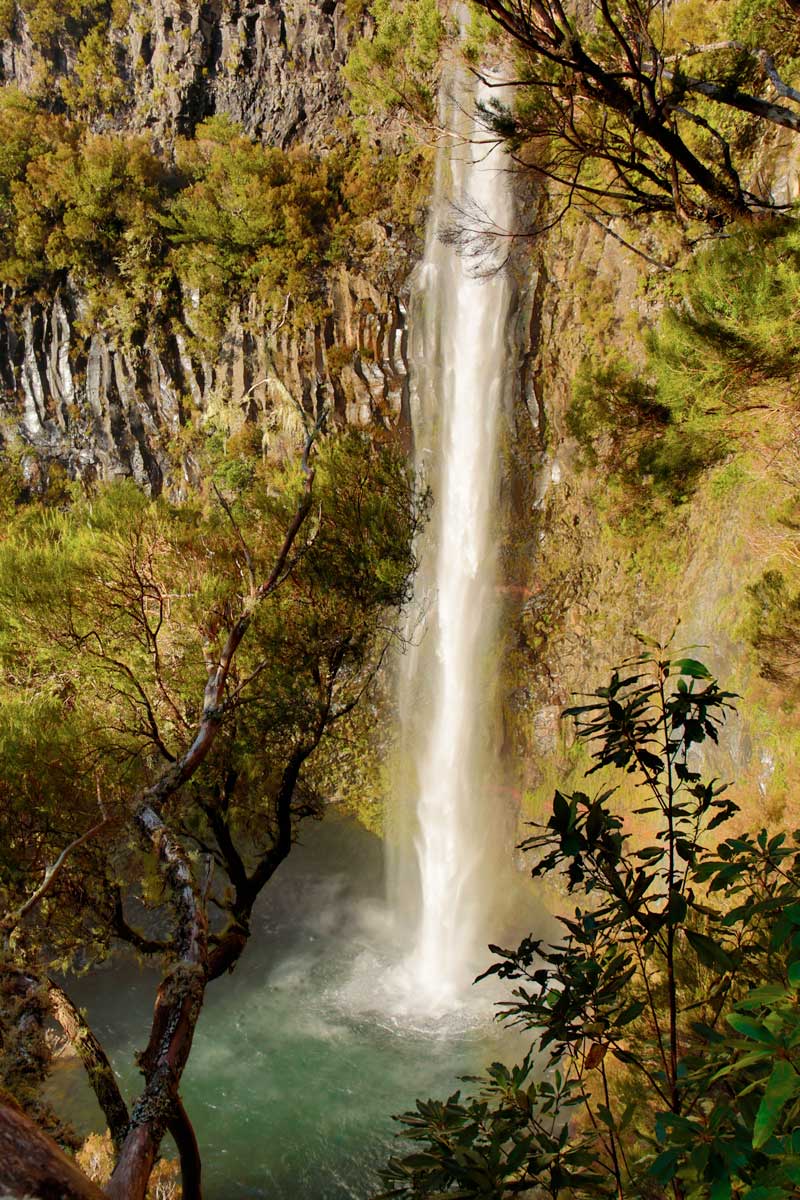 Many things I did not even get to see or do that I wanted to, although I did make the sunrise on the highest and the second highest peaks, but I never jumped on the three hour ferry to the island with a twelve kilometers long white sandy beach and turquoise water. (Madeira has no beaches worth mentioning other than man-made.) 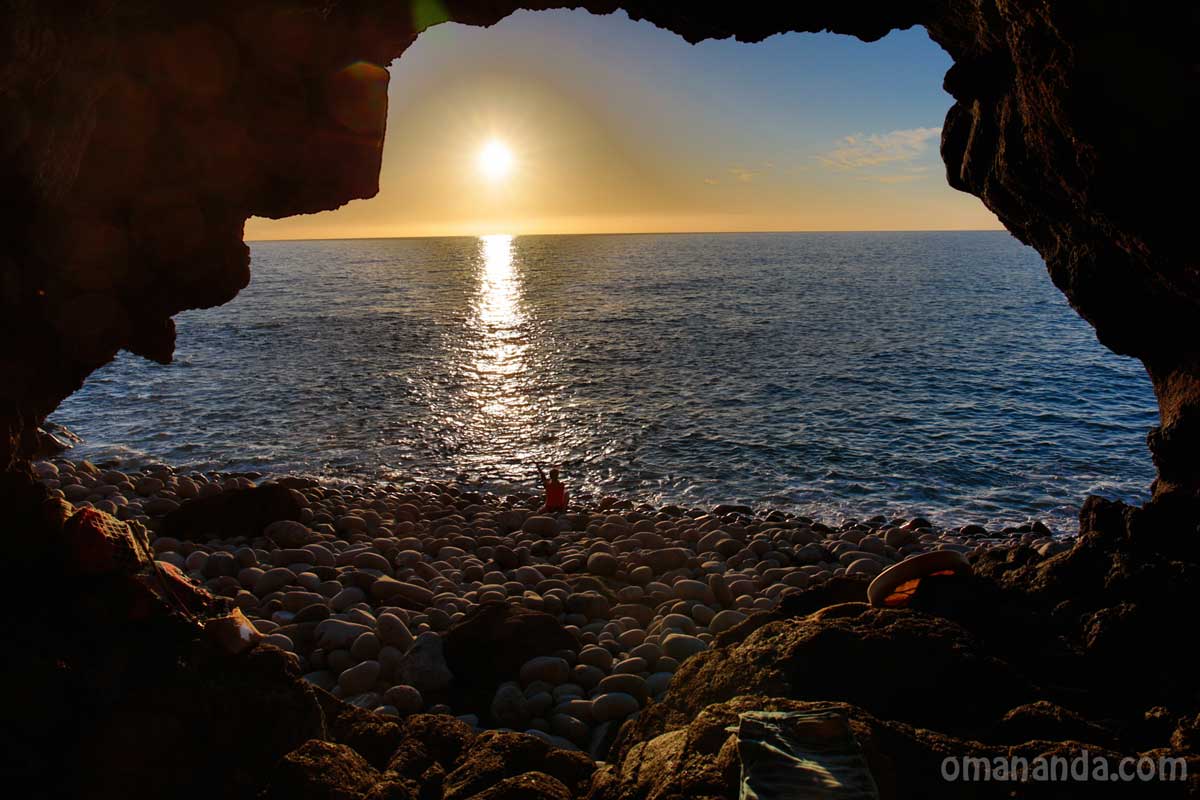 What were my complains about the island? The orange street lights are very annoying! They are all over the island and escaping them at night is hard, if not impossible. Seeing the stars there is not easy because of that, which makes me a little sad. If human impact on nature is so harsh that we can not even see our heritage, it’s easy to forget where we come from. To me, seeing the stars is vital stuff! But I found one escape route. A volcanic cave that was obviously sacred. I went there many times playing my shaman drum. I even recorded podcasts there that were magical prayers I did in honor of Lord Shiva during Shivaratri. Listen to it here.

That’s it for now. I might write more about Madeira later, so come back for it and subscribe to the FREE Newsletter

My Time in Madeira2018-06-262018-12-26https://www.transcendentaljourneys.com/wp-content/uploads/2020/05/transcendental-journeys-visionary-writing.pngTranscendental Journeyshttps://www.transcendentaljourneys.com/wp-content/uploads/2018/06/transcendental-journeys-19.jpg200px200px
Recommended Posts
Comments
Claim your FREE eBook
Subscribe to the FREE Newsletter to receive Omananda writings only shared with Newsletter subscribers. You will get special discounts over time and freebies.
Subscribe to the Podcast
Google PodcastsAndroidby EmailRSSMore Subscribe Options
Copyright: www.omananda.com - all rights reserved © 2020
Contact Us 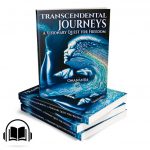 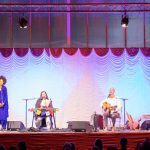