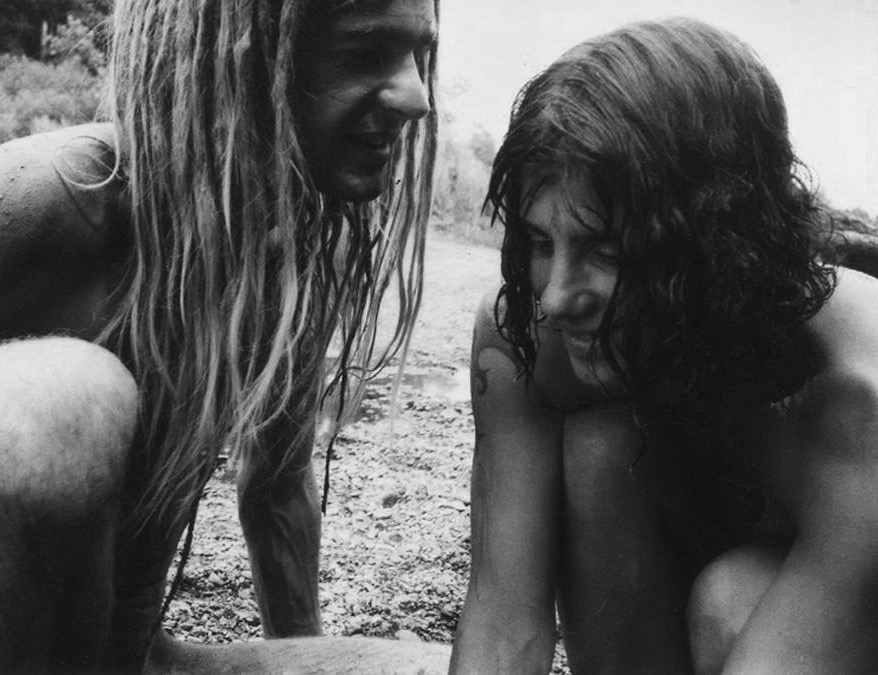 Angelique and Torsten in Goa, 1997

* The following story has been published in Transcendental Journeys – A Visionary Quest for Freedom, the book by Omananda

Angelique was a super cute and very interesting woman with an infatuation for me. We had first met on MDMA at Gaby and Dieter’s place in San Francisco during an after party, where I had fallen head over heels in love with her. Angelique had liquidated her apartment in San Francisco and sold her motorcycle in order to join me on some wild adventures in India. I invited her to participate in the naked living experience with me and took her to the jungle. But once she arrived, some Indian guys just would not leave her alone. It did not seem to matter if you asked those Indians kindly to leave or screamed at them to go away, they acted just like flies and refused to grant us any space. They followed Angelique and me around all day until it got dark, when they finally disappeared. That night I realized Angelique was much more wild than I was!

Normally, I used a flashlight when going through the jungle at night, but she told me to turn it off so we could find our way like animals do. Her suggestion sounded nuts to me. The jungle hosted three deadly venomous snakes, including cobras and vipers. There were also scorpions and other poisonous creatures, such as spiders, ants, and centipedes! The moon was not shining either and it was pitch black when we tried to find our way through the bush. I was surprised however, when my third eye switched on suddenly after not much time had passed and I could perceive energy! Instead of hiking brashly through the forest, we moved much more gently around the bushes, feeling our way around the plants without harming them or being harmed by them. We did not even get scratches on our bodies and readily found our way back to the spot I called home, where we planned on relaxing and sleeping for the rest of the night.

At around three in the morning, Angelique woke up fearfully. She said that someone was coming. It was her first night in the wild jungle, so I calmed her down and let her know that nobody ever comes through the jungle at that time and that she could relax. But she insisted that someone was coming and she seemed afraid for her life, so I showed her a hollow tree where she could hide and instructed her to not come out of it no matter what happened. I told her to wait there for me until I returned. I then waited to see if anyone was indeed coming.

A few minutes later, I started hearing faint sounds of cracking branches and then I saw two human shadows approaching! These Indian men came directly and intentionally towards our forest camp. One of them seemed to be the same person who refused to leave Angelique alone the entire afternoon on the beach the previous day. Upon seeing them, I suddenly felt enraged! An enormous energy I had never felt before coursed through my body.

I was quite wild at this point after living naked in the jungle, and I kept a spear! I had put up painted totems throughout the forest signaling that spirits inhabited this place. When I saw these men, I grabbed my spear and started running towards them at great speed. In that instant, I had a clear intention to kill them both. This was not really a mental response but an energetic one and there was no reasoning behind my rushed actions that could have stopped me. When they saw me, they ran for their lives up the waterfall towards the plateau, like monkeys climbing up trees. I followed them closely behind, still with an extermination agenda, throwing stones, but thankfully I could not catch them and they never came back.

It was not unusual to hear about murders occurring every year in this forest, but the Indian police never found the killers. I felt certain that these men came to rape Angelique, but somehow they did not expect me to be there. Or perhaps they did? I wondered if they maybe wanted to get rid of me, but their plan was apparently flawed and my wild behavior must have made quite an impression on them, potentially saving our lives! Before that night, I had no idea I had it in me to actually want to kill someone instinctively. Afterwards, I was glad that I did not catch them, since I knew I would have killed them without a second thought. I later realized it was a life or death situation that left no option but to kill or be killed first.

Angelique and I became a couple and when we returned to the United States we started living together in California in a house next to the Russian River, north of San Francisco. Although we had bedrooms, we felt more comfortable sleeping outside, after getting used to living in the jungle. We spent a few happy months together like that and then we decided to go on a cross country motorcycle trip. We had already packed up the house and were almost ready to leave when I heard a dull thud. After I checked what it was, I found Angelique on the ground under a fig tree. She was laughing but also crying and had apparently fallen out of the tree while picking figs. She could not get up, and when I assessed her, I noticed her belly was hard like wood and she said she had a tingling feeling in her legs. I knew this to be symptoms of a broken spine, so I called an ambulance immediately. Once the paramedics arrived, they carefully put her on a stretcher and sent her to the closest hospital. I followed them on the motorbike. When she arrived at the medical care facility, they asked for her insurance, but she had none. The hospital rejected her admission and transferred her to the general hospital in Santa Rosa where she was admitted. After tests and X-rays, it was confirmed that two of her vertebrae had collapsed. Thankfully, the damaged thoracic vertebrae were attached to her ribs that held her spine in place so her spinal cord was not injured from the impact. As a treatment, they gave her a brace, and she needed no further medical intervention to heal on her own.

After her injury, we decided to visit Rob and Lisa in the countryside where Angelique could recover in a quiet and peaceful setting. In spite of that, she no longer seemed certain about anything or our relationship and appeared increasingly confused. I still loved her very much, but she did not seem as carefree as before and after she recovered decided to take a job as an au pair. This suddenly thrust her into a situation where she became almost a slave to an unfamiliar family that she had to live with at all times. We had phone conversations during this time and she told me how much she disliked her new job. We could not see each other regularly any longer and when I visited her one day, I learned that she was having an affair with a woman! Angelique was bisexual. This complicated our situation even further, so I felt a need for some space and decided to leave San Francisco without her.

I had heard of a place called Real de Catorce that is a pilgrimage place for the Huichol people. The Huicholes, or Wixárika are indigenous Native Americans who live in Mexico. They use a psychoactive cactus called peyote during their traditional religious ceremonies. I really wanted to meet these people and thought that driving there would allow me to make contact with them. I thus packed up my VW bus and drove towards Los Angeles. On the way there, I broke out in tears of sadness about my breakup with Angelique and how our relationship had ended in such a strange turn of events. Although we had seemed so in love with one another, it appeared we were not meant to stay together. Life had something else planned for each of us and I was later saddened to learn that Angelique met an early death just a few years after our relationship had ended.

Maha Shivaratri — The Embodiment of NatarajaAll Posts Are Here, Books